You might be in the process of installing a heavy kitchen appliance on the wall, such as a range hood. If so, you’ll need to look for the wall stud for proper support. However, how do you find a stud if you don’t own a stud finder?

In this post, we’ll show you how to use various methods to locate a hidden stud. We’ll also provide some picks for stud finders, so you can always get the job done right. Image of a man drilling into a white wall. Source: Charles Deluvio, Unsplash

What is a stud

A stud is a board that provides structural support for a wall from ceiling to floor in a building. They’re either 2x4s or 2x6s and typically wooden. Both exterior and interior walls may use studs.

Load-bearing studs have a higher priority. After all, dividing walls don’t provide any structural support to a house, but load-bearing walls do.

What is a stud finder?

A stud finder is a device used to locate a stud behind a wall. A stud finder is the most reliable method for locating studs in a finished wall. You’ll need to find the studs first if you want to put in new windows, shelves, or doors.

A stud finder can often locate concealed boards and alert the user to a beeping noise. It also has a flashing red laser that can be used to make marks as high as you want on the wall. 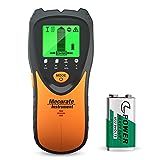 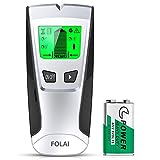 Do I need a stud finder?

A stud finder is not required to locate a board under the drywall. Knocking on the wall will tell you quickly if you’re dealing with a stud or a hollow section. But, of course, your mind may play tricks on you, so this isn’t guaranteed.

You might make a mistake and end up with a hole in the wall that has to be fixed. But, unfortunately, things become trickier when you can’t find a replacement for the original paint.

How to find a stud without a stud finder

If you don’t have a stud finder handy, use these instructions to find the stud behind your wall.

Inspect the area around the outlets

The studs in a typical house are spaced a few inches apart and are placed near switches and plugs. So, to get started, first, get a measuring tape. The first step is to use a measuring tape to draw a vertical line on the wall 16 inches to the left of your outlet. Second, draw a vertical line 16 inches from the right edge of your electrical outlet. Your stud will likely fall between the two lines.

Double-check the nooks and crannies

If no outlets are present, you should expect the first stud to be 14.5″ from the wall’s edge. Use a measuring tape to determine the exact size. Once you locate one stud, the subsequent studs are typically located sixteen inches farther out. After you’ve measured the space, knock on the wall to ensure it’s sturdy.

Listen for a deep void

When you locate a stud, it will be concealed by the drywall. If you knock on the wall, you should hear a substantial response. A hollow sound indicates that there is no stud underneath the wallboard.

Ensure that you’ve connected with the stud.

Verify that you’ve successfully connected to the stud as the last step. You can find out without delay if you drill through the wall. You haven’t found a stud in the wall if the screw goes in easily. When the screw passes through the wall, the drill should gradually slow down, indicating that you have reached the correct location.

If you want even more tips and insights, watch this video called “5 genius ways to find studs in a wall… without a stud finder!” from the Perkins Builder Brothers YouTube Channel.

This video called “5 genius ways to find studs in a wall… without a stud finder!” from the Perkins Builder Brothers YouTube Channel.

Do you still have questions? Below are some of the most commonly asked questions about stud and stud finder.

How far apart should studs be?

Standard wall stud spacing is 16 inches in the center. However, 24 inches is also acceptable.

How do you locate a stud with a tape measure?

The drywall in your room’s corner is likely fastened to a stud. In most cases, you may safely assume that if you measure 16 inches in either direction from a corner, you will locate a stud (though there may be overlap at the point where the drywall joins). Therefore, you should gauge your distance from the corner by 16 inches.

Is a Samsung 5G Galaxy Note 20 a good tool for locating a wall stud?

Yes, and in fact, it’s quite simple. Walabot DIY Plus Wall Scanner is a free app that may be on the Google Play Store. After installing the software on your device, finding the studs in your walls is as easy as pushing a button.

Well, the way to know whether there are any studs in a wall is by using a stud finder. But if you don’t have one and are building a new house, ensure to include such a component as part of your plans. All it requires is time and patience!

This article covered what a stud and stud finder is and provided an answer to whether you need one. Here are some key takeaways:

So, do you use a stud finder? And did I cover everything you wanted to know? Let me know in the comments section below (I read and reply to every comment). If you found this article helpful, check out my full blog for more tips and tricks in your kitchen. Thanks for reading, and stay safe.