It’s not uncommon for people to come together during the holidays to cook. Consider the time you and your loved ones spend together in the kitchen. But does the air you breathe while standing in the kitchen contain dangerous substances?

This post will cover common cooking fumes, why they are so detrimental to your health, and what you can do to clean the air in your home. Image of kitchen with white walls, a countertop, a sink, and a range hood over the stove. Source: Michelle Forrest, Pexels

Cooking fumes can contain carcinogenic and mutagenic compounds, such as polycyclic aromatic hydrocarbons and heterocyclic compounds. Several studies have also found a link between cooking fumes and lung cancer.

What are cooking fumes?

Nitrogen dioxide, carbon monoxide, volatile organic compounds, carcinogens, and more may all be found in cooking fumes. If you accidentally breathe in cooking smoke, you may be exposed to these hazards.

Carbon monoxide, a colorless, odorless, tasteless gas, is released in small amounts when food is cooked. Inhaling smoke from cooking could kill you if you don’t take care since high levels of this gas can cause you to lose consciousness or even kill you.

Also, microscopic food debris may be dispersed. Because these particles are so small, it is easier for them to get into the respiratory and circulatory systems, where they can cause infections and inflammation.

How do cooking fumes form?

The most common source of kitchen odors, fumes, and debris is, of course, cooking. Many harmful compounds are released into the air through certain cooking fuels, and smoke from burning oil at high temperatures may irritate the lungs.

Are cooking fumes bad for your health?

Yes. Particulate matter (PM) and harmful gases like carbon monoxide, nitrogen dioxide, and volatile hydrocarbons, some of which are carcinogens, are all part of kitchen smoke.

Researchers in Taiwan have discovered that the vapors from frying oil include aldehydes, a class of chemicals thought to cause cancer. Some research shows that if a pregnant woman is exposed to the fumes from frying oil, it could affect the weight of her baby.

How do I avoid breathing in kitchen fumes?

There are many ways to improve your indoor air quality, here are just a few.

Bringing in fresh air from the outdoors is perhaps the simplest thing you can do to improve air quality in your kitchen. Usually, all it takes is cracking a window.

Some of the most common sources of air pollution in the house are the kitchen and the bathroom. Make sure to run the kitchen exhaust fan when you cook. And if your kitchen doesn’t already have an exhaust fan, you should get one installed.

If you are constructing a new house or renovating an existing one and want to install a range hood, you should buy one that fully covers all the burners and has the correct sizing and vents to the outside. Cooking on the back burner will increase your capture efficiency.

A paper in the journal Scientific Reports says that recent meta-analyses show that using a vent hood and keeping the room well-ventilated may cut the risk of getting lung cancer by a large amount.

A few minutes before you start cooking, turn on the range hood for optimal results. Please turn it on and let it run for approximately 15 minutes once you’re done using it. Choose the proper speed for models that provide more than one, depending on how much food you need to cook. The maximum heat setting should be used while stir-frying. When taking care of ductless units, change the filters when the manufacturer says to (usually every two months for normal use).

If you are in the market for a new ducted range hood, below are some of the most popular ones on the market. 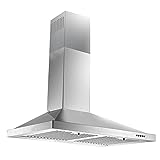 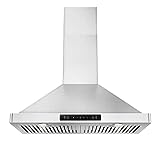 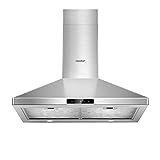 3. Get an indoor air monitor

As opposed to a carbon monoxide detector, a low-level CO monitor is the superior device for detecting the presence of this gas. TruTech Tools has both the Defender and the CO Experts versions of this item, both of which are of the highest quality.

4. Use an air purifier

An air purifier is a fantastic investment if you reside in a location where the air quality is less than ideal. Air purifiers are devices designed to rid the air of contaminants, including dust, dirt, odors from cooking, and odors from pets. Larger particles, such as dust and grime, are easier to remove using an air purifier than gases like carbon monoxide or formaldehyde.

However, if you have an air purifier equipped with an activated carbon filter, those lingering smells of dinner may be gone in no time. In addition, mold may be prevented with the use of a dehumidifier and air purifier.

If you are looking for a top-rated air purifier, look no further. Here’s the one that I use every day.

If you want even more tips and insights, watch this video called “How cooking smoke is dangerous for your health | Killer in the Kitchen | Amit Badlani” from the Amit Badlani YouTube Channel.

A video called “HOW COOKING SMOKE IS DANGEROUS FOR YOUR HEALTH | Killer in the Kitchen | Amit Badlani” from the Amit Badlani YouTube Channel.

Do you still have questions? Below are some of the most commonly asked questions about if cooking fumes are bad for you.

Is it safe to cook without a range hood?

No. Without a range hood, it may dangerous to prepare food. Carbon dioxide, carbon monoxide, formaldehyde, and other carcinogens are created during regular cooking. If your kitchen lacks airflow, these dangerous gases will build up and spread to the rest of your home.

Can I get carbon monoxide poisoning from cooking?

Is it safe to fry in my home kitchen?

Deep frying requires very hot oil, so the process must be carried out carefully. The use of cooking oil in the house presents a significant fire risk. The oil may start a fire if it comes into contact with a flame.

Inhaling smoke and cooking fumes is a certain way to mess up your lungs. One way to avoid this is to upgrade your kitchen’s air circulation system. Placing a range hood over the stove is a great way to improve the air quality in your kitchen.

This article covered cooking fumes, how they form, and whether they are bad for your health. Here are some key takeaways:

So, do you despise kitchen odors? And did I cover everything you wanted to know? Let me know in the comments section below (I read and reply to every comment). If you found this article helpful, check out my full blog for more tips and tricks in your kitchen. Thanks for reading, and stay safe.